I don't now remember the sequence of clicks that brought me to the Amazon page for John le Carré’s new George Smiley novel “A Legacy of Spies”. Maybe I was set off down that path by one of the several marketing emails the kindly internet titan sends me daily. Or perhaps I was already on the site browsing idly as a time pass, in the pithy Indian-English phrase.  Whichever the path, I assume I was nudged gently along by Amazon’s unsleeping algorithm, which, with its vast knowledge of my ways, surmised that, as I lay abed on just such a fine summer morning in just such a place, I might be ripe for the moody pleasures of a Smiley. 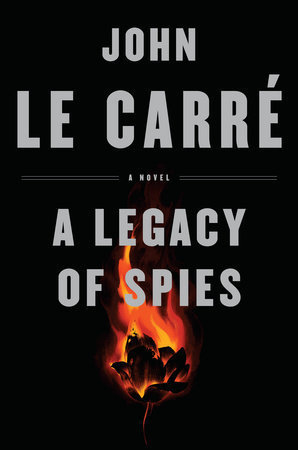 Soon there I was, approving the cover design, red and yellow flames on black, probably the case files on your wretched Joes that you’re hurriedly burning in some dark cellar in Dresden, just minutes before the Stasi and VoPos come bang down the door. I glanced through the editorial puffs – “to read this simmering novel is to come in from the cold.”—New York Times, “We wish for more complexity and logic in our politics, so we look to make political art that is logical and complex: a genre defined by John le Carré.”—New Republic – before checking the customer reviews.  Knowing the bias towards 4 and 5 stars – you are more likely to gush if you like something, and to just walk away if you do not – I read the carpers and critics first.  “Disappointing from John Le Carré”, said a certain Mr. Jonix in a three-star review that had the tone of some truth: “it feels as if he has just used past novels to write a pretty flimsy story just to bring out another book.”

Forewarned, I cracked open the final test, the Look Inside. The first sentence got a tick, terse, plain, informative, if a bit long: “What follows is a truthful account, as best as I am able to provide it, of my role in the British deception operation, codenamed Windfall, that was mounted against the East German Intelligence Service (Stasi) in the late nineteen fifties and early sixties, and resulted in the death of the best British secret agent I ever worked with, and of the innocent woman for whom he gave his life.”

Operation Windfall! The heart races … the bleak Berlin backstreets; those damned flimsy Eastern bloc overcoats that fall apart in the first damp; the devilish triple-crossings, the beatings in the cells, the shootings, the sordid betrayals within betrayals! But no. What you get next is a long life-history of Peter Guillam, Smiley’s younger sidekick and the book’s narrator, and of his parents too. Here is the father, “a wastrel son”, “a man of rash appetites”, though with “a redeeming love" of France, who is “taking the waters” and “cutting a dash” at St. Malo in the summer of 1930, when, happening upon Guillam’s “pretty and flighty” mother to-be on the crowded promenade, a “whirlwind romance” irresistibly follows.

Look, I’m as guilty of worn out stock phrases and characters as the next hack blogger, but then I’m not John le Carré trying to knock out $14.99 on the back of the famous Smiley. The man is not even trying, Jonix is right, I concluded, sadly, though not without a nice trickle of pride in my critical skills and ability to withstand the mighty Amazon.

But hold on now, what’s this? An attractive blue and gold rectangle glowed in the “Customers Who Bought This Also Bought” panel: it was “Call for the Dead”, the first of the Smiley novels. Well, why not?  Click and Look Inside.  Here, on Smiley’s ill-assorted marriage to Lady Ann Sercombe, I read: “And so Smiley, without school, parents, regiment or trade, without wealth or poverty, traveled without labels in the guard’s van of the social express, and soon became lost luggage, destined, when the divorce had come and gone, to remain unclaimed on the dusty shelf of yesterday’s news.”

I smiled.  Now that is a writer trying hard, and succeeding too in pulling out a fresh, poignant metaphor. Click, click and I had bought a Smiley.  I smiled. And curled down somewhere just behind my glowing computer screen, an algorithm also smiled.